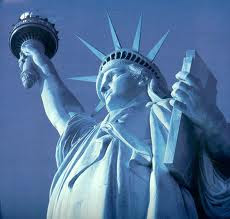 Individual freedoms are important to most Americans.
We believe that some type of representative democracy is an insurance against dictatorship.
We value our freedoms and we believe that they are conductive to a free society, innovation, progress and a better standard of living for all.
It is apparent that when institutions public or private, are centralized and become more powerful they  attract
people interested in seeking power. The concentration
of power at the top of these organizations often leads to abuses of power.
The majority of people, who earn their reputation and remuneration in life by servicing other people are not interested in acquiring power and control over other
people. We all benefit when our neighbors and friends are happy, free, honest and successful.
The average person builds, creates, innovates, learns, solves problems, risks, invests and provides products and services to others, values other people freedoms, may be self-reliant or more social, may be hard working or highly productive.
If you are this type of person and do not seek to influence and control others, then probably your goal is not to be promoted through the ranks and eventually to the helm of a powerful, centralized organization. Those positions are instead filled with people who think they know better and seek positions of power and control over others. Only in rare cases, when they have developed a strong ethical philosophy that has been tested during their lifetime, such people may have the fortitude of caring about the opinions and individual freedoms of others.
It is not surprising then, that the average person has become resentful of centralized institutions: whether these write laws and regulations, establish the value of our currency, control the way we work, gather and use our private information through social media, or choose the news we are presented with.
Centralized institutions limit or infringe on personal freedoms in the following areas:
Misinformation and censorship
Americans have become more careful about the source of their news. With the pervasive use of the Internet, web news sites and social media sources have become more influential, and consequently more controlled by people with a political agenda.
Powerful sources may create news that conform to their agenda (misinformation), and block news that are contrary to their agenda (censorship).
While many independent sources can be found on the web, this usually involves some time and effort, while large news services are more visible, especially when the browsers we use are possibly biased and programmed by large organizations.
The entertainment industry, because of the large funding requirements for production of television programs and movies, still has a large influence on the masses.
Freedom of speech and freedom of religion are the first victims of centralized, influential
news services.
Privacy and Security
Large and influential institutions may feel they are above scrutiny and decide to gather and keep private information about their customers. Recently we have heard of several cases in which institutions and organizations have gathered private information without consent, or compromised private information. In other cases, account passwords have been stored in readable form and exposed to the company's employees.
Currency creation and distribution
Money is the representation of the work we do: products we create and services we provide. Since work occupies a major share of our life and earned money is a measure of that effort, money is important to us, not only as a means to acquire personal property, but also as a means to help others.
When the money supply is arbitrarily created and controlled, whether by the central banks or by regulations, the effects may be economic hardship for many and possible advantages for a few.
The Blockchain promise
Blockchain technology promises to help in all of the above areas, by providing the basis for
However, ten years after the introduction of this technology in public networks, these promises have not been fulfilled. The few public networks that have maintained independence from large organizations (unpermissioned networks) have problems of scalability, efficiency and cost.
Bitcoin cannot support applications and its currency is volatile. Ethereum, which theoretically can support distributed applications, at this time has problems of scalability and cannot support a single application the size of a social network.
The good news is that a completely different approach is now been proposed to fulfill the blockchain promise. New, stochastic networks, using different designs and protocols, are on the way, solving the problems that have stalled blockchain technology for years.
The proposed network model is not de-centralized any more, but distributed and stochastic. In the distributed model, there are no classes of nodes and there are no intermediaries (miners, verifiers), but each node is equally involved in the verification of transaction and maintaining the security of
the network.
The proposed consensus protocols are also new: All current blockchain-based consensus protocols, more than sixty varieties of them, are leader-based. One node broadcasts the block to every other node. The proposed protocols are not leader-based but reach an agreement on the composition of the block among a majority of peer nodes.
This evolution of blockchain technology is described, for example, in the article at: https://medium.com/@gori70/blockchain-de-centralization-is-the-problem-79984bbf24f5
This transformation will solve the current problems of scalability and allow distributed applications with high data transfer requirement to use blockchain networks. Software development companies will be able to use a more functional distributed operating environment for their applications.
The blockchain will be replicated on all user devices. The advantages for users will be: usability, security and transparency.
These new developments will also open the way to the use of superconnectivity, the connecting thread between blockchain applications and the IoT world.
Stochastic, fully-distributed crypto-networks will soon fulfill the blockchain promises, revitalize the blockchain industry, disrupt crypto-mining industries, reduce energy utilization, provide an alternative to current crypto-networks and effectively revolutionize the distributed application world.

Giuseppe Gori is the CEO of Gorbyte (gorbyte.com), a blockchain research, development and innovation company. Gorbyte started researching distributed consensus models a few years ago and is currently developing GNodes, a new crypto-network that uses the first blockchain-based, distributed consensus protocol, called MARPLE. When MARPLE is used as a consensus protocol, all nodes participate in assembling the block, and in verification and security functions, without the need of intermediaries or monetary reward. Gorbyte is currently raising private funds through a security token offering STO in partnership with DealBox (Carlsbad, CA, USA) and TokenIQ (Phoenix, AZ). The funds are being used for the development of GNodes.