The following diagram shows how, after the first attempts at decentralization in the 1990’s, the Distributed Ledger Technology has progressed in the last few years, by using crypto-networks’ blockchain technology and different consensus models: 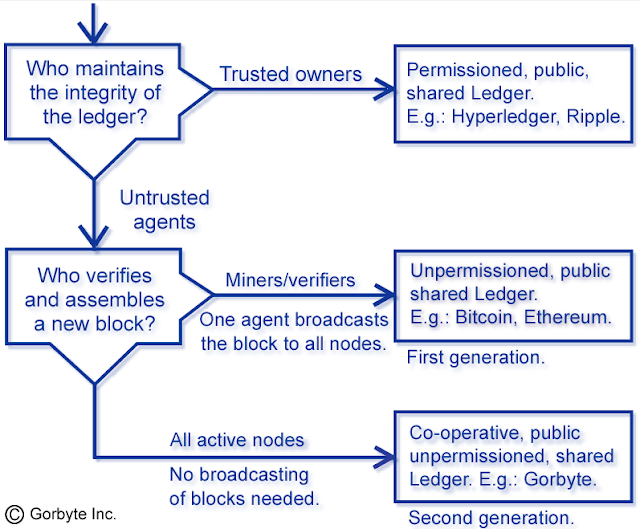 
Note that many classic fault tolerant solutions (BFT, XFT, non-BFT), such as Paxos, Raft, etc., and Directed Acyclic Graph solutions, such as IOTA Tangle, and Dagcoin, are not designed for, or implemented on, blockchain technology.


MARPLE, by Gorbyte Inc.TM
MARPLE, a new cooperative consensus protocol, is the key component of Gorbyte, a second generation crypto-network.
It distinguishes itself in the decentralization aspect of block assembly and equalization.
Since all nodes are already broadcast every transaction, MARPLE reaches agreement by equalizing blocks within Logical Environs.
Gorbyte’s security against DoS and majority attacks is also enhanced by its BRUD device architecture, allowing the detection and prevention of such attacks.
This combination allows for a higher throughput (from current crypto-networks 3-15 tps to 200-6000 tps), lower cost, a free service model, and scalability: every user device can participate as a full network node.
Properties of consensus (MARPLE):
Replication requirements (Gorbyte):
MARPLE’s restrictions and assumptions:
MARPLE Attributes
MARPLE (Majority Agreement Recursive Protocol based on Logical Environs) is characterized by the following attributes: